Introduction and Overview
The Eurasian continent stretches over an area of roughly 55 million squared kilometers and is home to 4.6 billion people. Whether it be the formation of the Himalayas, or the 2008 Sichuan earthquake, many of these geological events are in some way attributed to tectonics. Throughout this site you can find in depth tectonic information for nine of the main tectonic plates spanning Eurasia; these plates are the Aegean, Adriatic, Amurian, Anatolian, Eurasian, Iberian, Indian, Iranian, and Yangtze. Along with offering knowledge about Eurasian tectonism, also provided is a database of topic pages that address other specific information regarding the geology of Eurasia. 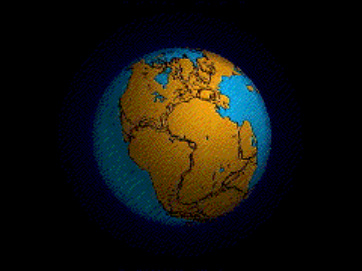 Courtesy of: http://www.nature.nps.gov/geology/usgsnps/animate/A08.gif
Dating back the geologic history of Eurasia isn’t straight forward. The continent we know today can be thought of as a collection of cratons that all formed and collided at very different times. For example, the formation of the Yangtze plate can date back to the Neoproterozoic (750 million years ago), while in comparison, the Indian plate is relatively young and took shape in the early Cretaceous (150 million years ago), right after the breakup of Gondwana (Bird, 2008). Figure 2 is an animated GIF showing the disassembling of Pangea into today’s continents.

Eurasia hosts a plethora of different geological features. These include volcanoes, triple junctions, seismically active faults, flood island basalts, accretionary wedges, etc. Volcanoes found on the continent are mostly located off areas of subduction, such as in Italy, Greece, or Turkey (see figure 2). Volcanism in Iceland on the other hand is not the cause of subduction, but rather because it is a flood basalt province sitting directly on top of the mid-Atlantic ridge (Walker, 1971). Iceland’s volcanism is a unique feature located on the Western edge of the Eurasian Plate.

Courtesy of: http://earth.rice.edu/mtpe/geo/geosphere/hot/volcanoes/volcanoes_b2.html
Another interesting geologically active area on the Eurasian continent is southern China. The Himalayas are where the thickest crust is found on Earth; roughly 60km thick. The mountains are the result of the Indian plate colliding into the Eurasian plate during the Eocene, approximately 50 million years ago (Prakash et al., 2007). India is moving at a rate of approximately 5cm per year towards the North-West, which is slower than 100 million years ago, but is still significant enough for the growth of the Himalayas (Kumar, 2007).

Seismicity is very prominent throughout the Eurasian continent. Being the continent with the largest population it is unfortunate that throughout history there are many accounts of deadly earthquakes. Many of these earthquakes happened in Eastern China; highly populated areas. An example would be the 1976 Tangshan earthquake, that although wasn’t the most powerful seismic event on record, was one of the deadliest. The magnitude 7.7 tremor occurred on a transform boundary between the Amurian and Eurasian plates and killed over 250,000 people (Butler et al., 1979).

Eurasia is not short of resources. Oil, metals, and salts are all abundant across the continent. Oil can be found in the North Sea (right off the coast of Norway), porphyry deposits can be found in Eastern Asia, and salts can be found in salt flats in arid countries such as Turkey or Iran. Resources abundance is an important geological characteristic of the Eurasian continent.
References: