The Adriatic and the Aegean Plates

The Adriatic plate, also known as the Apulian plate, is situated in the deformation zone at the boundary between the Eurasian and the African plates. This microplate is bordered by an orogenic belt, the peri-Adriatic mountain chain that runs through Italy and Greece, in the region surrounding the Adriatic Sea (Channell and Horváth, 1976). Once part of a promontory at the edge of the African plate, it has been pushed into the Eurasian continent lithosphere by the convergence of the Eurasian and African plates during the Cenozoic (Battaglia et al., 2004).

The Adriatic plate consists of two blocks, a northern and a southern one, which have different lithospheric thicknesses and divided by an E-W trending shear (Devoti et al., 2002). The low seismic activity in the Adriatic Sea indicates that this plate is relatively rigid (Battaglia et al., 2004). It is bordered by major fault zones surrounding it to the north and the east. In the northern region, the Peri-Adriatic Line runs through the southern Alps as a major continental fault (Picha, 2002). To the east, along the Dinarides, a complex system of  strike-slip and thrust faults marks the boundary with the Eurasian Plate (Picha, 2002). On the west side, the Adriatic plate subducts underneath the Apennine Mountains in Italy in a subduction zone that extends south towards the Ionian Sea and beyond (Devoti et al., 2002). These tectonic features outline the plate and are responsible for the unusually twisted shape of the plate. 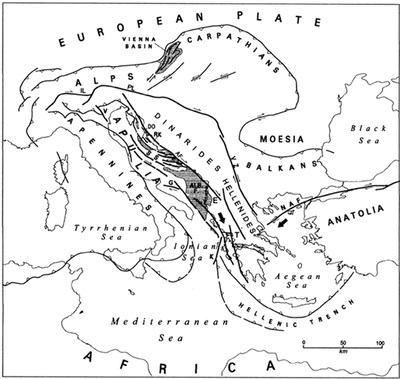 Map of Adriatic plate and its tectonics (Picha, 2002) 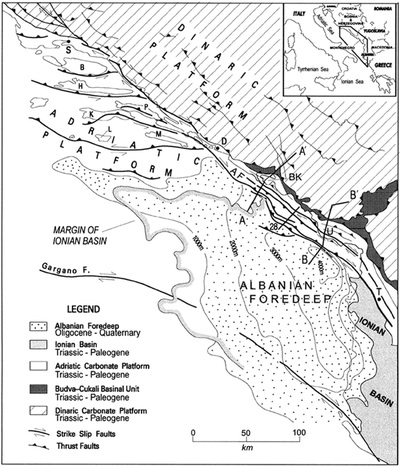 Map of the eastern part of the plate, with the right-lateral Adriatic strike-slip fault system (AF) and other faults(Picha, 2002)
The general direction of this plate is NNE with respect to Europe, with a small counter-clockwise rotation and an Euler pole located approximately in North Italy (Devoti et al., 2002). This direction of motion suggests that it is completely independent of both the African continent, which has a NNW direction of movement in this region, and the Eurasian plate (Battaglia et al., 2004).

The geology of the region encompassing the Adriatic and Aegean microplates is mostly comprised of Neogene and Quaternary sediments overlying carbonate platforms and an igneous rock basement (Channell and Horváth, 1976).

Located between the Adriatic and the Anatolian plates, the small Aegean plate is also caught between the converging Eurasian and African plates. Its border is defined by a belt of active seismic activity surrounding the plate (Innocenti et al., 2010). 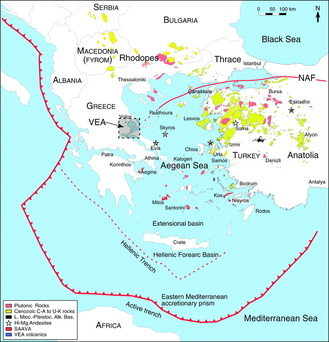 Map of the Aegean plate and surroundings (Innocenti et al., 2010)

A model done by the Berkeley Seismological Laboratory describes a plate rate of about 34mm/year for the Aegean plate relative to a fixed Nubia plate, in a SSW direction (Apel et al., 2007). 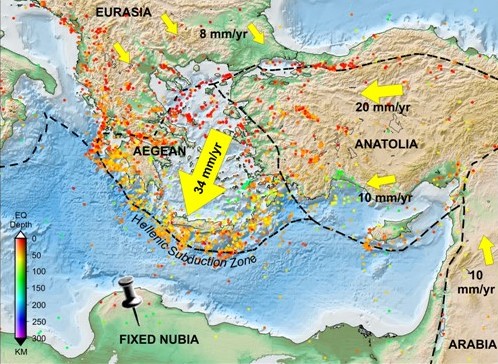 Channell, J. E. T. and Horváth, F.: The African/Adriatic promontory as a palaeogeographical premise for alpine orogeny and plate movements in the Carpatho-Balkan region, Tectonophysics, 35(1–3), 71–101, 1976.