The Anatolian Plate is situated in Turkey and forms part of a complex and comparatively active system of tectonic activity in the region with its surrounding plates. The plate shares a boundary with the Eurasian Plate, the African Plate, the Arabian Plate and the Aegean Sea Plate. This region is perhaps most well known for the North Anatolian Fault; the east-west striking continental transform fault situated in northern Turkey, which produces persistent earthquake activity along the fault. The region can also be further subdivided into 3 smaller tectonic regions: The Pontides, The Anatolide-Taurides and the Arabian Platform.(1)

The overall relative plate motions of the region are shown in figure 1. 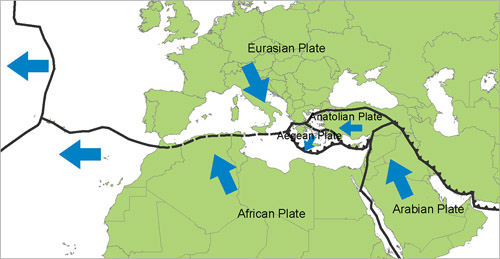 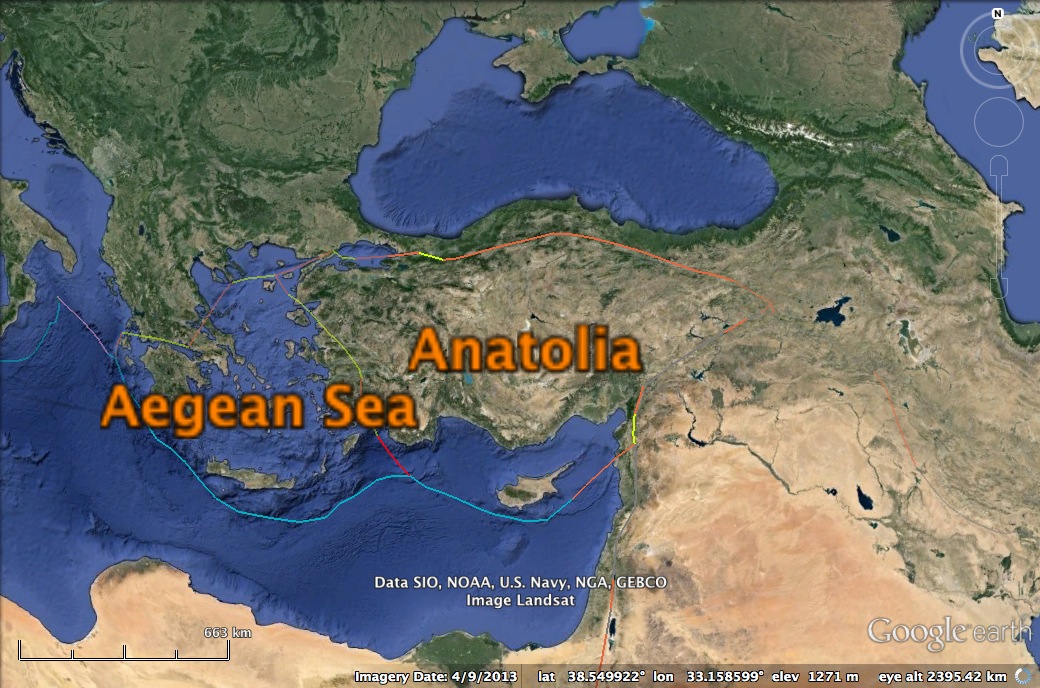 Classifications of the Anatolian plate boundaries (3): Orange = Continental Transform; Blue = Subduction; Red = Ocean Spreading Ridge; Yellow = Continental Rift.
The Anatolian Plate was originally formed in the Oligocene as a result of the Alpide Orogeny, which described the collision of multiple terranes and the closure of the Tethyan oceans (1). Much of the geology of Turkey provides petrological clues to the processes that took place in this orogeny, mostly through the presence of widespread ophiolites formed through the obduction of these Triassic Tethyan oceans (1).

The geological setting of Turkey is characterized by ophiolites and ophiolitic melanges formed by the closing of multiple Triassic or younger oceans. One of which is the Karakaya Complex; a highly deformed and metamorphose accretionary complex of a Paleozoic to Triassic Tethyan ocean (1). Bordering this complex is a Cretaceous ophiolitic mélange found throughout the Izmir-Ankara Suture Zone. The Anatolide-Tauride Terrain in central and southern Turkey was formed through the obduction, subduction and collision events during the late Cretacious in the Alpide orogeny to form another large ophiolite body (1).

The North Anatolian Fault is subject to scrutinous examination due to its close proximity to many of the large cities and its regular seismic activity.The fault is a dextral strike-slip fault zone along Northern Turkey and has produced 6 fatal earthquakes of M>6 in the last 20 years. The fault is characterised by periods of seismic unrest separated by quiet periods of ~150 years and it is believed that the origins of the present fault activity began in the Pliocene (4). The fault zone comprises of 2 separate branches joining in a northward convex bend. In this bending zone, the system is dissected by two belts of fold-thrust and wrench faults (6). The zone and its surroundings can be shown in Figure 3.

There is a oceanic rift along the boundary between the Aegean and the Anatolian, which developed during the Oligo-Miocene due to the retreating Hellenic subduction zone, making the Aegean ocean between the two plates a relatively young one (1).